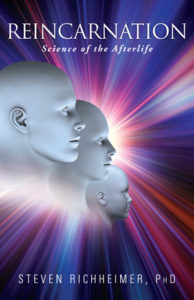 Reincarnation: Science of the Afterlife

Is there life after death? The Eastern religions universally affirm the doctrine of reincarnation along with the law of karma. They define salvation as the attainment of union with God. Judaism, Christianity, and Islam have strong historical ties to reincarnation and the idea that we must "reap what we sow." Even today, a majority of the world's population believes in reincarnation.

But is belief in an afterlife just wishful thinking or can the scientific method possibly provide an answer? In this book, Dr. Richheimer explores the well-documented scientific evidence that children and adults sometimes have detailed and verifiable memories of their past lives. He argues that people with exceptional talents and genius may have retained these abilities from previous lives. In addition, the extensive studies by Dr. Ian Stevenson at the University of Virginia demonstrated that birthmarks, birth defects, and elements of personality were passed from one incarnation to the next.

There is considerable scientific evidence that negates the materialist model that mind can be reduced to brain activity. Phenomena such as unified sense of self, memory, placebo effects, stigmata, hypnotically produced physical symptoms, mystical experiences, out-of-body consciousness, near-death experiences, and ESP clearly indicate that mind is a nonlocal, nonphysical aspect of our being that can theoretically survive death.

Experiments in quantum physics demonstrate that quanta can be connected with one another or entangled and that this connection is not dependent on time or space. Experiments prove that quanta are nonlocal and that they only emerge into what we experience as physical reality if they are observed. This indicates that consciousness is "king," not matter.

Einstein's theory of relativity describes space-time as four-dimensional. We experience the flow of time as our three-dimensional world moves at a constant rate through the fixed matrix of space-time. This model suggests that if we had four-dimensional "sight" we would not experience the flow of time but an "eternal now." Hence, Einstein's description of reality is consistent with that of the mystics that claim that our perception of reality is but a shadow of an all-encompassing wholeness or oneness that is can be described as the "spiritual worldview."

Reincarnation is consistent with the idea that the ultimate goal of human existence is to attain union with God, since this could take more than one lifetime.