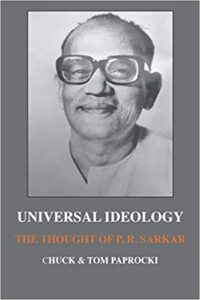 This book on Universal Ideology is the second in a trilogy on History, Ideology and Revolution. The first book, in 5 volumes, traced the evolution of Western Civilization from the period of prehistory when the matriarchy ushered us out of animality and created the first social structures of the clan, clan confederation and tribe. The great agricultural civilizations of the ancient world were a product of the matriarchy. The second volume looks at the birth of patriarchy in the Middle East during the period of Ancient History and the third volume takes us into Europe during the rise of the Catholic Church priest class during the Middle Ages. From there our history explores the rise of the capitalist class and the course of Modern History to the end of WWII. The last volume explores Contemporary History and the rise of the ultimate global capitalist empire under the domination of the American capitalists.

As we trace our history, we observe the origin of the divisive sentiments that rule our thinking today. We witness the rise of gender bias, racism, class exploitation, religious dogmatism and national chauvinism. We conclude that the ideas that dominate us are too divisive and limited in scope to overcome the debilitating environmental and social problems that confront us today.

In this book on Universal Ideology, we explore the makings of a comprehensive value-system that addresses our common human predicament. In doing so, it explores, not just the human psyche and social psychology, but the nature of Consciousness itself. The book proposes that the historic quest of human beings for wealth and power is nothing but a mental distortion of the uniquely human urge to realize unlimited happiness. This overwhelming urge is actually a calling from our deepest self, our soul, that can only be satisfied by the possession of an Infinite Entity. As such, no matter how hard we mistakenly try to satisfy this urge through the possession of finite objects, the farther we remove ourselves from the only solution to our anguish, sense of isolation and emptiness.

This book is an exposition of the ideas of a man who was both a yogic master and social revolutionary. His ideology builds bridges between humanity’s best scientific and mystical ideas and provides us with a common means to achieve our highest stance as being human.