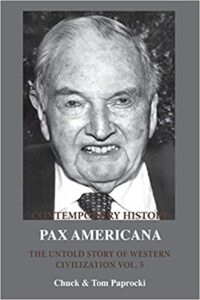 In Volume V of our history, we witness the making of the most expansive capitalist empire of all times. From the end of WWI to the present, the capitalist class of the USA has created a global empire that has come to dominate the entire world. This volume examines the methods by which the American capitalist class achieved this feat and what its impact has been on the world’s people and particularly the American people who have by and large come to enjoy the benefits of empire but who have also paid a steep toll on their well-being due to cultural privation, economic anxiety, continual warfare, and environmental destruction. This volume looks at how the capitalist class uses elite intellectuals to promote capitalism to the world’s people and how it uses elite warriors to destroy anyone who stands in the way of their exploitation of the world’s labor and resources.