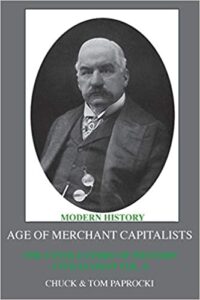 The Untold Story of Western Civilization, Vol. 4: The Age of Merchant Capitalists

In Volume IV of our history, we leave the Middle Ages and begin our exploration of Modern History at the time when the Merchant Capitalist class begins to rule Europe and economically colonize the world’s people. Chapter 1 looks at the European Renaissance and the birth of free thought that ultimately challenged the iron rule of the Catholic Church that dominated Europe for over a millennium. Chapter 2 explores the Protestant Reformation that led to almost 100 years of war between the Catholic Church and the new Protestant religions. Chapter 3 discusses the Enlightenment period when the new Capitalist society threw off the shackles of religious dogma and reintroduced philosophy and science as fields of study. Chapter 4 takes us to North America where we look at the lives of the Native Americans before the arrival of the colonists. We discuss the process of colonization, the American Revolution, the introduction of slavery and the birth of civil and religious institutions. Chapter 5 discusses the period of American History from the Civil War to the conclusion of World War II to demonstrate the development of a global Capitalist Empire.